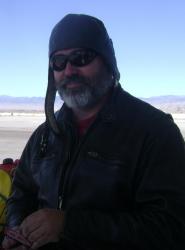 Weeks on the road, fucking perfect!

Years ago I had a real job and things were pretty good. My wife had bought an ironhead from a buddy that had been in a storage locker for years and gave me a pretty sweet birthday present. For quite a while I had stayed late and tinkered, made parts, fiddlefucked around with the bike and pretty much learned about machining from the desire to create. It wasn't long before the owners of the business got tired of staying past 5 PM to lock up and gave me my own key to the shop - one of the true turning points of my life. After Hours Choppers was pretty much set in motion.

We didn't have cable or Direct TV and I constantly had to listen to bullshit stories of some homo-erotic show called American Chopper and how this dude named Jesse James turned an engine out of a single chunk of billet. Yes, the people that hung on every word that came from the Discovery Channel have always been idiots. I grew up with the mindset that choppers were a way to express oneself - now it was becoming lame, the bi-product of anything mainstream. fuck.

I had started making parts and even multiples to help me pay for my habit. I spent years building the original AHC site and it was angry. Through months of insomnia and booze I had stumbled upon the will to lash out online. It led to many new contacts of others that were really sick of the BS. Things grew and several parts had started to become products as I never stopped no matter how many cnc retard shops proved their mastery of ass-clownery....cnc guys are NOT machinists!...they have not earned that title from behind a computer screen....fuck those guys!.....but I digress...

In 2005 'After Hours Choppers' was born, soon after that my job kinda went south. Even though I had quit my job to persue this damn white-whale I still have access to the shop 24 hours a day - for that I am eternally grateful to 2 of my biggest supporters - Ken & Charlie.

After all that it's just been about getting by. Things are slim all over but I still get to head out for weeks at a time and visit friends across the country. There's just nothing like being out there with zero responsibilities and no bullshit besides whatever comes along the way. When we can, the wife and I both head out and enjoy living on the road. If I had a ton of money in the bank I doubt I'd be home all that often - just float around the continent and experience life....something that's just not done from behind a computer. It's not about rallies & parties, it's about come-what-may and dealing with it all, meeting great people and above all - enjoying the freedom this still-great country offers us. Don't wait until the time is 'perfect' cause that'll just never happen.

As for me personally, I'm just another idiot trying to get by. I'm not super cool, I don't hang with all the awesome chopper rock stars that start to believe they're something special because keyboard bikers tell them how cool they are. I have my friends and that's enough for me. I meet great people at the shows and get emails from dudes all over the world that dig the parts and honesty that I've put out there for the world to see over the years...of which has gotten me into a shitstorm more than once. I do say some crap that can come across as wrong, but it's my opinion and view on my own site, so suck it. I have been perceived as an asshole, racist, a dick, a pig,...all the making of a terrible porn that you grab by 'mistake'. I'm a pretty easy guy to get along with unless you're an assclown that's trying to sell an image or sensitive about something that's true. I'm sorry you're sensitive, it doesn't mean I'm wrong.

Swing by the booth when I'm at a show, it's never a bother. I've gone up to plenty of these bullshit-trendy-blaring crappy music-sideways cap-tattoo&pierced-fly by night "chopper guys" and been snubbed 'cause I look like a tourist at a bike show. I pretty much laugh and move on. The real guys are the dudes sitting by their lonesome, with awesome wares and no fanfare just trying to make a living doing what they love and not whats cool right now. Trends come and go, people with heart stay forever.